Posted on March 2, 2014 by A Place In Time Photography

In all things, even in the most recondite mysteries of the soul, nature is the first and finest of teachers. ~ Thomas Moore

All week I had been keeping a keen eye on weather forecasts, watching for windless days with minimal shorebreak and just hoping that they will coincide with those same mornings that I’m not scheduled for a shoot so that I can take full advantage of these last few weeks the waters will be teeming with whales.  Fortunately Friday morning was promised to be pretty darned close to perfect so I anxiously set my alarm for a pre-dawn wake up, got my equipment ready the night before and settled in to get a decent night’s sleep.

As promised, Friday morning was not to disappoint and despite the unusual chill in the air, I was on the water before the sun had fully risen over the crater – still a soft pinkish hue resting in the sky.  Almost immediately upon leaving the flat sandy shoreline, I noticed a resort canoe perhaps a half mile out from the beach and sitting still as if watching or waiting for something.  It didn’t take long for me to spot a whale come up fairly close to them, take a few breaths, and go back down.  I debated whether to head in their direction, or to travel further down the coastline like I usually do and see if I could find my own whale, but curiosity got the best of me and I decided to paddle out and pay a quick little visit to their new friend.

This was the start of what became an amazing 3 solid hours spent with the friendliest, most engaging  Singer I’ve ever personally seen.

To offer a little more detail, a Singer is a male Humpback whale which is almost always alone, and will generally hang vertically while vocalizing for long periods of time before surfacing briefly and returning below to sing some more.  There are various theories on why these whales sing, but it’s primarily been documented during mating season, and seems to be a way of calling in other male whales, versus females, and is speculated as a way for other whales to identify each other.  No one can really say for certain though, this is just the best educated guess proposed by reasearchers.

This particular Singer was amazingly friendly and would stay under the water for approximately 10-20 minutes, before coming up and surfacing then going back down to sing some more.  It was fairly easy to find where he was because he actually wasn’t singing too far below the surface, I’d guestimate maybe 20-25 feet down, so I could easily see his entire reflection while floating above him if I looked closely. He would also stay almost directly below wherever he dove which was also quite convenient for allowing us to reconnect.  As is typical of all the Humbacks, he  was followed by the traditional schools of little fish which would swarm him both below the water and on the surface as well giving another indication to those of us on top of the water where our friend might be.

For anyone who hasn’t had the experience of sitting with one of these majestic creatures while they vocalize, I want to try to explain it the best that I can.  The first time that I heard singing two years ago, I was about a mile or a mile and a half out from shore, and I started hearing an odd, high pitched noise, accompanied by a vibration through my board which I could easily feel on my feet.  At first I began to panic wondering if my board had somehow gotten a crack, or was releasing air because I couldn’t quite place the noise and it didn’t even occur to me that it would be coming from right below me.  At that time I didn’t yet carry a mask with me so instead I just sat down quickly and calmly to assess the situation.  It didn’t take long before a couple in a kayak showed up as well and we had identified the source of the noise – just not exactly where it was coming from.  That was until the man put on his mask and slipped in the water only to quickly start cursing and gasping for air, exclaiming that the whale was underneath us about 10 feet down – RIGHT underneath us he declared!  It then quickly surfaced a few feet away and swam away leaving us all in a relative state of shock and awe.

That could be counted technically as my first up close and personal whale experience, which has been easily be topped this year on several occasions with such a large number of them coming in fairly close to shore and also with me being better equipped with both my new board, underwater camera and a mask so that I can easily slip in the water if the opportunity arises.

What was so fantastically fun about this Singer on Friday, is that he would stay perfectly still both while I was hovering above him on my board and also when I would slip off into the water to film his singing. When his song changed into a higher pitch and he made the preliminary motions of beginning to surface, he would then come up very, very slowly underneath me so that I was able to swim directly above him at a distance of 10-15 feet max without fins, as he swam.  Several times I was easily within a distance of 10 feet, and I could see that he was watching me closely like he was being very careful and conscious of his movements as if not to hit me, and every single time he wouldn’t start using his tail to propel himself until I had stopped swimming and fallen back behind at a safe distance.  It’s amazingly fortunate that he was so aware of his actions, because with a flick of his tail, I could have easily been launched into a full Jen breach.

Over and over and over again, he would repeatedly swim up directly underneath me, take a few breaths then dive back down to his 15-20 foot depth.  I would quickly swim back to my board and hop out of the water to paddle over until I found him again where I’d then either sit on my board and warm up a bit in the sun watching him sing, or I’d immediately slip back in the water and just float above him filming or taking still photographs.  Towards the last hour of our time together, he had apparently managed to call a few friends and we (humans) got a great “swim by” from 2 other huge whales.  Then to my surprise when I dropped in to watch him sing for one final time before heading back to shore, one of his new buddies had joined him, and the two of them were resting there together just a few feet apart singing their little hearts out.

Throughout this experience other paddlers, kayaks and canoes came and went and the Singer was nice enough to swim up alongside most of them making all of us extremely happy.  I’ve attached some photos, and video stills as well as a video I put together of a sampling of just some of the numerous videos I shot of this new friend.   I can only hope that before the whales head out for new waters within the next month, maybe I’ll be able to cross paths with this lovely little guy another day. 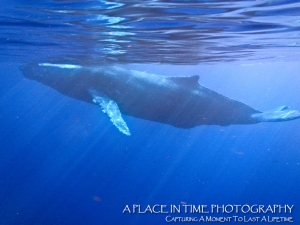 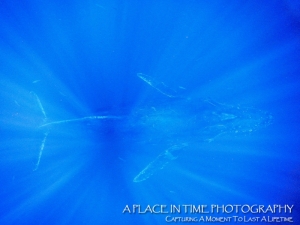 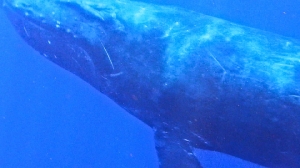 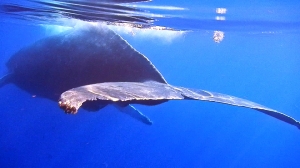 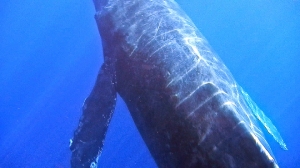 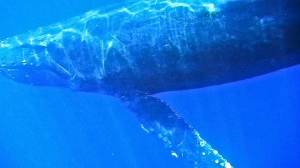 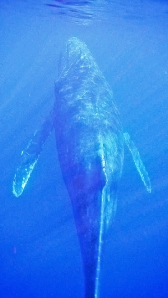 About A Place In Time Photography

I am Professional Photographer based out of Maui, HI. The passion behind my photography business is (1) to travel and volunteer both within the US and abroad with various animal sanctuaries to (2) capture valuable visual and written documentation to be able to (3) put to use in educating others. This all done with the hopes of being able to give back as much as possible both within the local community as well as internationally - especially when it comes to environmental protection and animal rights. People can't begin to fix a problem if they don't know it exists.
View all posts by A Place In Time Photography →
This entry was posted in Animal Welfare, Environmental Solutions, Life, Photography Fun and tagged hawaii, Humpback Whale, island life, maui, Maui County, Paddleboard, Singers, Swimming with Whales, tourism, travel, Wailea, watersports. Bookmark the permalink.

3 Responses to The Whale’s Serenade